The “Fanfare Digital” series is a collection of recordings from the Ed Burke master tapes, hand-selected for their exceptional recording quality and carefully remastered to compact disc format by Ken Mason.  These are the finest examples from a collection spanning the 1950s and 1960s.

Ed Burke not only served as director for several drum corps in the Miami area, he was also one of the first to collect audio recordings of the activity.  By 1955, he was traveling to distant shows and recording personally.  He issued several LPs under his own “Fanfare” label in the 1959-1962 period.  Documentation showed his continued involvement, both in corps administration and recording, through 1966.  So it was a pleasant surprise to find several reels labeled “1967” among his master tapes . . . and then, three more tapes close by without a year marked, but clearly containing the 12 contestants from the 1968 VFW finals, looking as if they had not even seen the light of day in the ensuing 40 years.

The 1968 VFW Nationals “Milliion Dollar Pageant of Drums” was staged on August 21 in Detroit, MI, in front of a large and engaged crowd.  It was a challenging night for recording in Detroit — hot, humid, even a dash of rain.  You’d never know this, though, if not for the sounds of distant thunder during Norwood Park and a few raindrops hitting the mics during Argonne’s concert number.  The sound quality is top-notch throughout the event, with brilliance and clarity that far surpass other 1968 recordings.

Fans of the Norwood Park Imperials will also get to hear the complete performance of their corps for the first time, as the Fleetwood VFW recording is missing their entire opener.

To preserve the escalating excitement of the night’s proceedings, these recordings are presented in order of performance on two CDs.  Norwood Park kicks things off on disc 1 with their fourth of four straight finals appearances, followed by the VFW finalist debut of the Argonne Rebels.  In similar fashion, Racine Scouts presented their third of three straight finals shows, followed by another first-time finalist, the 27th Lancers.  The sweet-sounding First Federal Blue Stars performed with expertise well beyond their three years of competitive experience.  St. Joseph’s of Batavia had a good year in ’68; this was the night their top-notch drum line tied for caption honors.

Disc 2 starts off with the inimitable sounds of Blue Rock . . . and then, the title battle, with five corps packed within 0.9 of each other in prelims.  First, the strongest Royal Airs contingent since their ’65 triumph whipped the crowd into a frenzy, a mere one-point penalty made the difference between second and fifth place in this tight contest.  Next up were the popular Kilties with their revitalized brass program led by Ken Norman; the corps had managed to defeat each of the title contenders one-at-a-time without winning any major contests prior to VFW.

As much as the preceding two units excited musically, the Troopers won the crowd over visually, with their ever-improving musical skills, threatening a repeat of their ’66 victory.  Then, it was Big Red, the Des Plaines Vanguard, in their best-ever year, going for the gold that would be theirs if their prelim fortunes held.  Cavaliers, defending champion status notwithstanding, couldn’t possibly be expected to repeat that feat after all those outstanding performances, but their own performance exceeded expectations.

As an added bonus, disc 1 includes the announcement of scores at retreat. 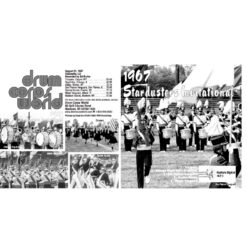 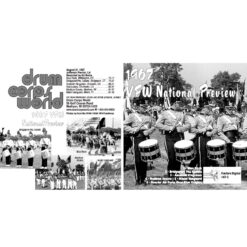 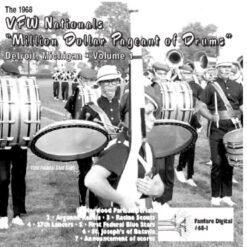